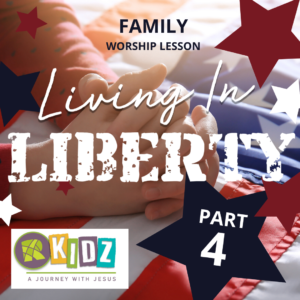 NOTE TO PARENTS: Each of the main points can be taught/discussed over different days throughout the week.

MORE FROM THIS LESSON:

BACK TO ALL LESSON TITLES

“You were running the race so well. Who has held you back from following the truth? It certainly isn’t God, for he is the one who called you to freedom. This false teaching is like a little yeast that spreads through the whole batch of dough! I am trusting the Lord to keep you from believing false teachings. God will judge that person, whoever he is, who has been confusing you.” – Galatians 5:7-10 NLT

The Apostle Paul wrote this in a letter to the church in Galatia.  He knew that they were having trouble running their race.  He reminds them that God has called them to freedom, to liberty.  But, they had listened to a false teaching.  What is a FALSE teaching?  (Allow your child to answer: a thought or idea that is taught to be true, but it really is not true, it is a lie)  He gives them an example about the yeast in bread dough.  Yeast is something that is put in bread dough to make it rise up, so that it isn’t flat.  Paul is telling them that listening to and believing in false teaching will cause us to slow down and/or stop running our race to Jesus and for Jesus.

In John 8:44 (NLT), Jesus tells us that Satan hates the truth and there is no truth in him.  He calls Satan a liar and says that he is the father of lies.  The enemy will try to tell us things and even speak through other people and things to try to get us to slow down or stop running our race for God.  He will tell us lies in our mind and through the mouth of other people to try to get us to not believe the truth.  It is so important that we know what the Bible says, what God’s word says because it is the ONLY truth.  Jesus tells us that He is the way, the TRUTH, and the life and that He is the only way to God the Father.  He is the only TRUTH and the only WAY to eternal LIFE.  There is no other way.

“I am trusting the Lord to keep you from believing false teachings. God will judge that person, whoever he is, who has been confusing you.” – Galatians 5:10 (NLT)

Jesus, we are so thankful for your words and truths in the Bible.  We want all of those truths to be planted and rooted in our hearts.  We want them to grow and be there forever.  We declare that nothing and no one will pluck out the Word of God and Your truth that is in our hearts.  We ask that you would protect the truth in our hearts, Holy Spirit.  Help us to remember to look to the Bible to know if something that we see, read or hear is true.  Give us wisdom to know the difference between the lies and the truth.  We never want to slow down or stop running our race.  We love you, Jesus.  And, it’s in your mighty name that we pray.  Amen.

Tell the children they are going to play a simple game that shows the importance of knowing what the bible says. Pass out the paper and the writing utensils and ask them to write the numbers one through ten. Then have them write “true” or “false” as you say each statement:

After the game, go over the answers with the class. Ask, “Was it easy to pick out the false statements? If not, what can we do to improve recognizing the truth (read the bible more often)?” Challenge the children to read the bible every day so they can increase their knowledge of truth.